Wisconsin’s recall election: an ominous crucible of US politics (Guardian)

The right threw resources into Scott Walker’s anti-union fight, while the Democratic party stood by. That’s a recipe for defeat.

Forget the old saw, “All politics is local.” There is a kettle’s worth of tea leaves to read in Wisconsin Governor Scott Walker’s triumph over Democratic challenger Tom Barrett. The acrimonious 5 June recall election is a perilous omen for President Barack Obama’s re-election bid and a faltering labor movement.

Upon taking office in January 2011, Walker went gunning for public sector unions and social programs. He inadvertently ignited six weeks of animated protests as hundreds of thousands of people flooded the Capitol of Madison, eager to stick a wrench in Walker’s plans to turn the clock back on public healthcare, education and labor organizing.

Since the “Wisconsin uprising” began, the Tea Party movement and organized labor have clashed in three separate state-wide elections. Republicans snagged a critical state supreme court post in April 2011. That August, the GOP clung to a razor-thin majority in the state senate by holding four of six seats up for recall. Having pummeled the Democrats again, by a 53-46% margin, Walker and the right are riding high. The only bright spot for Democrats is that they appear to have captured one of four state senate seats, giving them a 17-16 majority.

END_OF_DOCUMENT_TOKEN_TO_BE_REPLACED

The Wonderful, Unpredictable Life of the Occupy Movement (Truthout)

I met Nomi on a bus in Baltimore. She was from Wisconsin and had been involved with Occupy Wall Street. She was part of Occupy Judaism and fondly recalled the Yom Kippur services she attended at the Wall Street occupation with hundreds of other people. Nomi said that, for the first time, she and her friends felt like they could combine the religious and radical dimensions of Judaism. The conversation fell silent as the bus rolled along. Suddenly she turned to me and excitedly announced that she met her girlfriend at Liberty Plaza. I smiled and responded, “That’s why Occupy Wall Street matters.”

By enabling people to find fulfillment in all parts of their lives, whether romantic, spiritual, political or cultural, the Occupy movement is more than a movement. It is life-changing. People experience themselves as complete social beings, not just as angry, alienated protesters. Nomi said she was no longer involved in the movement, which I thought was more evidence of why the actual occupations were so important.

END_OF_DOCUMENT_TOKEN_TO_BE_REPLACED

The American Dream As We Know It Is Obsolete (Alternet)

Why progressives need to think beyond the mantra of creating a “middle class America.”

We’ve hit 14 occupations thus far. The latest ones being Charleston and Huntington, West Virginia, and Lexington, Kentucky. One common refrain is “the American Dream” is no longer possible, it’s dead or it’s a nightmare. The American Dream is shorthand for the middle class utopia. It’s the post-WWII ideal of well-paying working class jobs that can support a family, which have full benefits, and hope that the next generation will be better educated, have more opportunities and greater prosperity.

It’s a powerful mythology that ignores how socially deadening post-war society was. It was based on American Apartheid, virulent anti-Communism and suffocating notions of sexuality. Poverty was still widespread at home, Cold War militarism and the rise of advertising boosted the economy and plunder from the underdeveloped world allowed for increasing standards of living at home.

In the following article published before the occupy movement began I argue against the idea that “saving” the middle class should be the center of political or social struggles. Now, this is highly relevant to the Occupy movement because many people we have interviewed think we can just return to this post-war fantasy with a few policy tweaks and an election or two.

Just as the current crisis festered over many decades and is thus deeply rooted in our socio-economic system, creating a new world means radically restructuring our society and social relations, something that is not going to happen overnight or by electing some Democrats.

END_OF_DOCUMENT_TOKEN_TO_BE_REPLACED

Where OWS and the Tea Party are coming from (Salon) 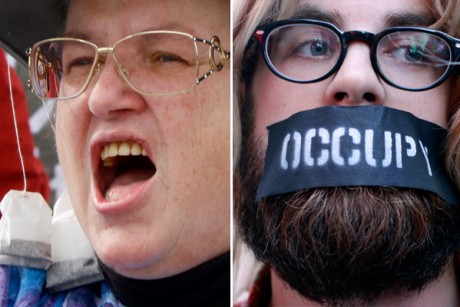 One month into the Occupy Wall Street protests, many are asking if this new movement is just a “left-wing Tea Party.”

Definitely not. This is not a party, like the Tea Party, that seeks to directly shape the policy and electoral process. Because it is explicitly leaderless, it is difficult to imagine a Michele Bachmann or Eric Cantor emerging as a standard bearer of the Occupy Wall Street movement. Given their reliance on Wall Street money, as well as radical demands from many protesters, the Democrats will find it almost impossible to channel “the 99%” into an electoral tidal wave next year, the way the Republicans rode the Tea Party to victory in 2010.

But that does not mean comparisons to the Tea Party should be dismissed. There are striking parallels between the two movements when viewed through the lenses of politics, society and history.