What happened to the Occupy movement? (Aljazeera)

Although media coverage has dwindled, Occupy cells are alive and well all over the United States – and beyond. 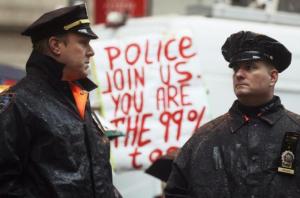 Occupy Wall Street was at the pinnacle of its power in October 2011, when thousands of people converged at Zuccotti Park and successfully foiled the plans of billionaire Mayor Michael Bloomberg to sweep away the occupation on grounds of public health. From that vantage point, the Occupy movement appears to have tumbled off a cliff, having failed to organise anything like a general strike on May Day– despite months of rumblings of mass walkouts, blockades and shutdowns.

The mainstream media are eager to administer last rites. CNN declared “May Day fizzled”, the New York Postsneered “Goodbye, Occupy” and the New York Times consigned the day’s events to fewer than 400 words, mainly about arrests in New York City.

END_OF_DOCUMENT_TOKEN_TO_BE_REPLACED

Occupy fights the law: Will the law win? (Salon)

From Boise to Nashville, the movement faces an unconstitutional legal siege

The Occupy movement is an exercise in the workings of power whether it is social, financial, policing or political. The occupations that began in September spread with an infectious passion in part because the police violence and mass arrests, the tried-and-true methods of state power employed to suppress radical movements, backfired and the movement grew more. By October hundreds of encampments had popped up nationwide with the tacit cooperation and sometimes explicit approval of local officials. For a few heady weeks Occupy Wall Street had the glow of popular legitimacy – social power – trumping whatever fusty laws prohibited camping or a continuous presence in a public space.

The inevitable counteroffensive was launched in November. Using the mass media, politicians hyped the movements as imminent threats to public health and safety, justifying aggressive evictions of prominent occupations in Oakland, Calif., Portland, Ore., and New York City. Within weeks other major encampments in Los Angeles, Seattle, Boston and New Orleans were scattered with hundreds of arrests. A third wave of closures has been underway since late January with occupations shut down from Hawaii to Miami and Austin, Texas, to Buffalo, N.Y.

Nonetheless, some encampments survive. In Houston a small contingent is legally maintaining a presence in downtown Tranquility Park, though a ban on tents and tarps has kept all but the hardy or desperate away. In Tampa Bay, after months of police harassment, occupiers found a safe haven in a privately owned public space donated by a wealthy supporter.

Now, a new strategy is being deployed to yank the rug from under occupations in four cities: legal power. Politicians have recently passed laws in Honolulu and Charlotte, N.C., that with a stroke of the pen made the occupations illegal, enabling police to sweep them away. Two more occupations, in Boise, Idaho, and Nashville, may be nearing the end as their respective state legislatures are on the verge of outlawing the democratic villages that for months have been thriving next to edifices of power. Critics charge that the anti-Occupy laws reveal how the law is not an objective code that treats everyone equally, but an arbitrary weapon wielded by the powerful.

END_OF_DOCUMENT_TOKEN_TO_BE_REPLACED

Whither the Occupy Movement?

With the forcible closure of major occupations across the country through a combination of police repression and official disinformation, the movement is at a crossroads.

END_OF_DOCUMENT_TOKEN_TO_BE_REPLACED

Occupation activists speak about what their vision for the economy and the movement is in Michelle Fawcett’s video.

From Mobile, Ala., to Chicago, lessons in the importance of holding territory 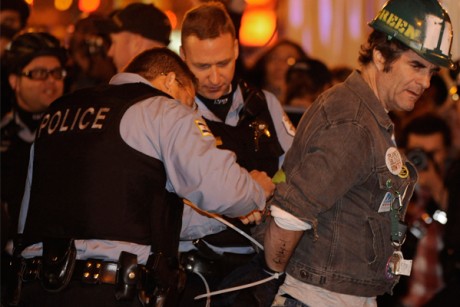 Occupy Chicago has not held any public space since mass arrests on Oct. 23. (Credit: AP/Paul Beaty)

The post-occupation movement is taking shape across America. In New York, Occupy Wall Street is mulling next steps now that Zuccotti Park has been politically cleansed. Oakland, Calif., and Portland, Ore., have been evicted. And other  occupations are staring at imminent police action, including New Orleans, Detroit and Philadelphia.

In Chicago, which has been unable to secure a public space, the Occupy movement is trying to figure out how to sustain a public presence through a harsh winter while staging creative actions that capture attention. And while Occupy Mobile in the conservative stronghold of Alabama was shut down two weeks ago without much attention from the national news media, the local movement has not gone quietly into the night, providing one answer to the question: Can an occupation movement survive if it no longer occupies a space?

The answer, based on my visits to occupation sites around the country, is:  “Yes, but …”