As we mourn a great chef, we shouldn’t sugarcoat the way he treated workers. 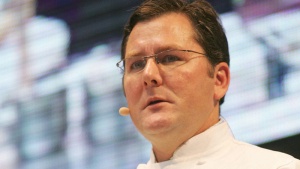 I met Charlie Trotter once, when he popped by the French Culinary Institute for an impromptu demonstration when I was a student there. It was 1996, and Trotter was rising fast in the pantheon of chefs. From the head of a kitchen classroom he fielded questions and described the harmony of flavors and textures he was creating as he carved cucumber cups, stuffed them with julienned apples, plunked them in a bowl of cucumber “water” shimmering with dill oil, and garnished them with jewel-cut melon, jicama and avocado.

He was only in his 30s, but it was classic Trotter: riffing on culinary standards with modern flavor notes and unconventional arrangements. It also represented the paradoxical nature of Trotter, who died on Tuesday in his Chicago home at age 54.

He was a self-taught chef appearing before students forking over dough to learn how to cook. He was in the domain of French food, but his palette of vegetable and fruit reductions, extractions and oils ran counter to the meat/butter/stock building blocks of haute cuisine. He melded imagination and refinement with hospitality and elegance, collecting awards for best chef and best restaurant in the nation at his peak, but was by most accounts a tyrant in the kitchen.

I got a taste of his anger when I asked him if he thought the flavor of wild salmon was superior to farmed. Smiling, he said there was no discernible difference. Surprised, I asked again, and his bonhomie evaporated. His eyes locked on me, his face scrunched slightly. “None,” he spat out.

It did not diminish my admiration for Trotter. His stellar cuisine was approachable for home chefs—an impossibility today, given the industrial laboratory required for modernist food. It did take a properly equipped kitchen and knowledge of basic techniques, but a passion for detail and precision mattered above all else. In my Manhattan tenement kitchen, I’ve recreated many of his dishes that soared with flavor, and a few that looked worthy of his sumptuously photographed cookbooks.

But as much as I idolized Trotter, I would not have wanted to work at his eponymous Chicago restaurant. Stories of his temper flowed freely, and he lapped it up, expressing irritation one year that he had been beat out by Michael Jordan for the number one spot on Chicago Magazine’s list of the meanest people in the city. One chef who interned with him told me of times when Trotter reduced grown cooks to tears or paralyzed them with fear.

That’s why allusions to Shakespearean tragedy keep bubbling up through the praise being heaped on Trotter since his death. One writer wonders whether “the same mysterious edge that made Charlie Trotter a genius also ended up killing him.”

As hard as he drove his cooks, who worked 70-80 hour weeks, scrubbed their own pots and sometimes snuck produce home to prep it before the next day’s madness, Trotter was hardest on himself. In the end, his family told the Associated Press, Trotter was taking medication for seizures, high blood pressure and high cholesterol. He still had steely determination, but his gymnast build had grown bloated. The weekend before his death, he reportedly defied orders from his doctor against boarding a plane to attend a culinary conference in Jackson Hole, Wyo.

But rather than pore over flaws that paled next to Trotter’s virtuosity, it’s time to admit that the real culprit is a restaurant culture that dishes out abuse. Michelin-starred chefs are often known for their prowess in screaming as much as for their cuisine. Few underlings will openly admit it, lest crossing a celebrity chef consign them to also-ran kitchens, but get a few seasoned cooks together and they’ll swap accounts of star chefs who hurl insults, torment weaklings, throw pots, or perhaps even a punch. As Donald Trump is to real estate, Gordon Ramsay is to the kitchen, building his public persona on being a flaming asshole.

During my brief forays into professional kitchens, I was challenged to a fistfight, worked with a line cook who broke someone’s jaw, and was told about a famed chef who would throw spice into the eyes of hung-over waiters during brunch service. While the stories are entertaining, they also suggest that many chefs believe that high pressure and hard work excuse bad behavior.

Charlie Trotter’s tragedy is that his life was both a testament to and indictment of the restaurant industry. He has an outsized legacy in the chefs he mentored, the Chicago dining scene that he made world-class, and the cuisine he crafted, which defied convention while delighting the senses. But tributes to his work would be elevated by acknowledging that great food shouldn’t be accompanied by abusive working conditions.