Freeport Is Not a Democrat vs. Republican Issue 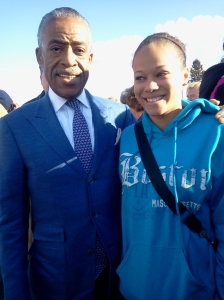 The Rev. Al Sharpton, host of MSNBC’s Politics Nation, led a rally in support of Sensata workers in Freeport, Illinois on Saturday, October 20, 2012. Standing next to him is 16-year-old Karri Penniston, who was arrested in October protesting the offshoring of the Sensata factory to China by Mitt Romney’s Bain Capital, which will cost 170 workers their jobs, including Penniston’s mother.

Freeport’s small-town feel is not all by choice. Its timelessness stems from being a backwater in the global economy. Locals say more than 90 commercial buildings and many more houses lie abandoned. An avenue downtown has been closed since September as the city struggles to find $100,000 to repair a crumbling bridge. Hip retailers have forsaken the town, and the chains sprinkled on the edges, Dollar General, Payless Shoes, McDonald’s and Walmart, specialize in squeezing profit from threadbare households. With a shrinking population and an unemployment rate near 12 percent, Freeport’s economy is so depressed that discount retailer Kmart plans to close its doors in January 2013 after 20 years in the town, throwing 45 employees out of work.

Right before Kmart goes dark Sensata Technologies will finish moving its production line from Freeport to China, leaving 170 more workers without jobs. The offshoring of the factory, which makes electronic sensors and controls for automobiles, would not raise eyebrows. Since NAFTA went into effect in 1994, millions of U.S. jobs have fled to countries with low wages and lax regulatory environments.

Sensata is different, however. It’s become an election lightning rod because it was created in 2006 by Bain Capital, the company founded by the GOP presidential nominee Mitt Romney. In October 2010 workers learned their factory and three others owned by Honeywell had been sold to Sensata. Newspapers quoted assurances from Honeywell that “all of the affected employees in Freeport … will be offered jobs with Sensata when the deal is closed.”

Cheryl Randecker, who’s worked at the Honeywell plant for 33 years, says in January 2011 the workers were ushered into a room where “a big spread of food” was laid out. Within three minutes, she says, “We were told, ‘Welcome to Sensata. We’re closing the plant and outsourcing to Malaysia, Mexico and China.’ ” The workers were resigned to getting the short end of the stick until a chance encounter in June with Chicago-based labor organizers galvanized them to make a stand against shipping jobs overseas.

While grateful for the support, the Sensata workers and unions backing them are at a loss for how to stop offshoring that leaves part-time, low-wage jobs in its wake. They want American workers to “wake up,” but pin their hopes on the Democrats who encourage job flight abroad and McJobs at home as much as the Republicans. A few unions have taken up the challenge of organizing the Walmart economy, but the projects are in their infancy. So the Sensata workers and unions have retreated to a fortress of conservatism – mourning the lost “American Dream” appealing to national interest, and excoriating “Communist China.”

The Bainport protesters have two goals. Tom Gaulrapp, a 33-year-long employee at the plant, says at first they “hoped for a miracle that we would get our jobs saved. Now we’re trying to be an example. Maybe some other businesses planning to outsource will take a look and say we don’t want that publicity.”

The second goal is to get their full severance, which was cut from one year to six months for many longtime employees two years ago.

Adding insult to injury, workers were told they had to train their replacements if they wanted any severance. Dot Turner, who’s worked at the plant since 1969, says “it’s demeaning” to train the workers from other countries. “Normally a plant can just move an operation and train them over there. It tells you the jobs are highly skilled.” She says until the protests began, “They used to have 40 to 50 workers from Mexico and China at one time.” Now they’re all gone.

With cameras trained on their camp, the protesters also want to ignite a bigger movement. On a crisp Saturday afternoon, Turner told a rally of a few hundred people, “If we did this all over the country we could stop … the outsourcing to Communist China. We’re fighting the rich. The wealthy are trying to stamp out the middle class.”

Their defiance is matched by fear. Worry clouds Randecker’s face as she says, “I don’t know what the future holds. It’s lose-lose around here. There aren’t opportunities to make this kind of money.” A single mother, Randecker says her 20-year-old daughter moved back home from an out-of-state college to save money and now struggles as she works work part time and continues her nursing studies full time at a community college. Randecker says a friend started at Kmart the same week the store announced its closing.

Gaulrapp asks, “Who’s going to hire me?” Turner sums it up bluntly, “Most of the employees have concluded they’re going to be without jobs in a town without jobs.”

They’re aging workers in a dilapidated city that begins each day a little poorer and a little less relevant to the markets. Randecker, Gaulrapp and Turner decry greed, a community left devastated, and the lost ideal of secure jobs in exchange for hard work and loyalty. They pine for a time when products were “made in America,” manufacturing jobs were plentiful, and paychecks could support a family and their dreams.

Reflecting on 43 years of work at the factory, Turner says, “You know it’s got to be a nice place to work. The pay is good. My husband and I put three children through college. All three have master’s degrees.” When Turner started work there as a newly married 18 year old, she says, “I thought I died and went to heaven the conditions were so nice.” She had left a job at Structo, a long-gone local manufacturer of toys and barbecue supplies. Decades later Turner still winces at the memory of hoisting grills to overhead hooks all day. At Honeywell, Turner says, “You could take bathroom breaks, smoking breaks, as long as you made your productivity.”

“WE BUILT IT BETTER”

The Sensata workers’ perspective is echoed by workers from as far away as Indiana, Iowa and Wisconsin who’ve made the pilgrimage to Bainport. On a Friday night, as Ed Schultz prepared to broadcast, there were machinists, teamsters, autoworkers, electricians, government employees, aerospace workers and hundreds of steelworkers, who unsuccessfully tried to organize Sensata decades ago.

Jeff Scanlan, an organizer with the Sheet Metal Workers International Association, says, “I’ve watched the steady decline of manufacturing in this area for the last 30 years. We built it better over here.” The 55-year-old Scanlan adds, “I had a good career in the trades. I was able to send my two girls to college. But I’m scared to death they’re going to do worse than I did.”

Scanlan and others rattle off manufacturers that once thrived in Freeport: Structo, Burgess Battery, and the W.T. Rawleigh Company, which sold household and nutritional products, are gone. Honeywell, Newell Rubbermaid and Kelly Tire (now Titan Tire), remain but factories have been padlocked shut and workforces have been chopped by 50 percent or more.

As for how to bring back good-paying jobs, Scanlan says, “Put tariffs on everything coming in from overseas. … We used to manufacture it, now we just install it.” When asked what about slapping tariffs on the thousands of goods found on Walmart shelves, he reiterates, “Everything.”

Just as Freeport exemplifies a conservative ideal, so does organized labor at Bainport. They accept the language of the market, returning value, increasing productivity, keeping labor flexible, prizing the home-owning nuclear family as the social building block. They proclaim, “The American worker can work as hard as anyone.” In return they only ask for stable jobs that pay “fair wages.” Few oppose, much less question, the dominance of corporations.

The darker times seem, the harder labor clings to the fading memory of the social compact, oblivious to the fact that Wall Street’s agenda transcends party labels. When I mention Clinton bulldozed Congress to ratify NAFTA, the usual reply is, “He now admits it was a mistake.” So what about Obama pushing the Trans Pacific Partnership, described as NAFTA on steroids? Silence. Though Jeff Scanlan confides, “It’s tough out there. I don’t have the answers.”

Solidarity does cross borders at times. Randecker says Chinese engineers asked her about an anti-outsourcing sticker on her shirt. “We explained it to them. We said it’s not your fault. It’s our government, your government and the corporations’ fault.” But with few opportunities to build international linkages among workers, the path of least resistance is appealing to patriotic capital and flirting with China-bashing, just as labor in the 1980s blamed its woes on Japan.

Programs like “The Ed Show” reinforce this tendency by obscuring the issue in partisan fog. Schultz described Freeport as “the belly of the beast of Mitt Romney`s economy.” The show was devoted to blaming Republicans for decades of job loss. The mantra was: The problem isn’t capitalism; it’s unpatriotic businessmen cutting deals with Communist Chinese. The entire political system isn’t responsible; it’s Republicans.

The solution is voting for Democrats, who tried to pass the “Bring the Jobs Home Act” that Senate Republicans killed last summer. What does this bill do? It gives a tax break to companies “relocating” jobs in the United States. Never mind that such tax breaks are ripe for abuse by corporations and there’s little evidence they create new jobs.

Turning Sensata into a partisan bludgeon will not help the workers. On Sensata’s website are two lists of plants: one from December 2008, and the other dated October 2012. The factories in Brazil, the Netherlands and Japan have vanished, but new ones have popped up in the Dominican Republic, Bulgaria and Shanghai. It’s a worldwide race to the bottom, and trying to plug the holes in the porous homeland with scraps of legislation is futile.

Take the Freeport plant. Randecker claims GM directed Sensata to shift the line manufacturing automotive sensors and controls to an experienced factory in Changzhou. Of course this is the same GM saved by the auto bailout that will likely win Obama re-election by putting Ohio in his column because of support from autoworkers whose jobs were saved. Then again, GM is doing what it has to in the kill-or-be-killed coliseum of the globalized car industry.

In the meantime lights will disappear by Nov. 7 and a few weeks later so will the last jobs. Labor organizers vow to nurture the storm brewing in the heartland. If it joins with others it could reshape the landscape, but if it gets sucked into Washington’s dead zone, then it will dissipate.

As for the workers, Randecker says, “There are a lot of people floating around here.” Freeport will be one step closer to a ghost town, haunted by one more specter of manufacturing past.